We have a pace calculator on our website which you can use to figure out what you might be able to achieve in a race and also what sort of pace to run in training.

It’s pretty straightforward to use except when it comes to figuring out your marathon pace, but it gives you a range of three possible marathon times.

The reason for this is that the marathon is a pretty extreme event, so it is hard to predict a marathon time based on shorter distances. So rather than give you a single figure I think it is better to show you a range.

The “Optimistic” time is based on a formula devised by Peter Riegel in 1977. This is the formula used for all other distances and it is pretty accurate for short distances. It predicts a marathon time only a few runners actually achieve (though some do achieve it, for example it predicts my times very well).

Ian Williams of Fetcheveryone had a look at the data for his runners and wrote an article about it that you can read here. I’ve used this article to come up with our “Conservative” time, though I actually used a different formula which should improve on it (see Geek’s corner below).

I call this time “Conservative” because it attempts to work out how the average runner will perform. But this average includes all the idiots who haven’t trained properly, who have set off too fast, or are running dressed as a chicken. I think you should be able to achieve the Conservative estimate if you train and race sensibly.

Finally with have the “Pessimistic” time. This is also based on the Fetcheveryone data but assumes that you will be roughly in one of the bottom 95% given your half marathon time. I think it is helpful to show the full range of marathon times, but I’d recommend you try to achieve a better time than this. I mean, you’re planning to train well and race sensibly aren’t you?

When you use our calculators or schedules you can choose whether to go for the optimistic, conservative or pessimistic estimates by saying whether you or biased towards longer or shorter distances.

The Riegel formula is:

What Ian Williams of Fetch everyone asked is whether the power 1.06 in this formula is the best choice. He studied how half marathon times predicted marathon times and found that the best power varies quite considerably from runner to runner, but a value of 1.15 would work for the median runner.

In his article he also drew the following graph showing how the best choice of power varies according to the half marathon time. 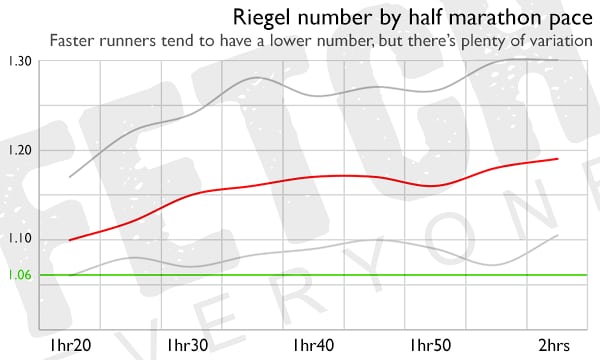 The correct power for the Riegel formula (the Riegel number) by half marathon pace. The graph comes from the article by Ian Williams linked to above.

The red line in the graph shows what value you should use instead of 1.06 to predict how the median runner will perform given their half marathon time. What this shows is that the basic shape of the Riegel formula doesn’t work so well since no single power works for all times. Since the red line in the graph looks roughly straight, I decided to let the power used in the formula vary linearly from 1.10 for an 80 minute half marathon runner to 1.20 for a 2 hour marathon runner. I also decided that for runners faster than 80 minutes I’d cap the power from below at 1.08. This is how I calculate the “Conservative estimate”.

Of course, one could try to produce a more accurate calculator by examining the data closely and taking more factors into account. If you are a computer scientist looking for a project, why not train a neural net or similar to predict people’s times? In practice, I think these formulae are accurate enough. They give a decent impression of the range of possible times you might achieve and are a useful reminder that we are all different.