Every couple of months, England Athletics invites the leading coaches on the National Coach Development Programme (NCDP) based in the South-east for a get together at St. Mary’s University College in Twickenham. I have been to various gatherings over the years and those sessions never disappoint. The wealth of experience and willingness among coaches to drive athletics forward is something I always find inspiring. Special thanks to Neville Taylor, National Coach Mentor for Endurance, for putting together a packed agenda.

This year’s NCDP coaching seminar theme was on ‘Aim higher’. The next Olympic cycle is already upon us and what has worked so far for the last 4 years, may not be good enough anymore to qualify for the 2020 Olympics and make the podium. Future performances such as sub 1’40’’ (800m), 3’26’’ (1,500m) or even the sub 2-hour marathon are discussed among athletics pundits. While these are big challenges, pushing the boundaries is the first step towards improvement. When we do not start to plan for it, it will unlikely happen, and then we will not strive towards improvement says Neville Taylor. This session on ‘Aim higher’ provides the context to explore how training would need to change to enable athletes to reach the next level.

The seminar started with a practical session led by Richard Blagrove. Richard is a Senior Lecturer for Strength and Conditioning at St. Mary’s University College and has authored a book with the title ‘Strength & Conditioning for Endurance Running’. The aim of the practical session was to assist coaches with screening and testing technique when working with athletes, regardless of their age. Screening and testing help to assess the athlete’s muscular and functional strength and weaknesses. Once the coach understands the athlete’s specific demands, remedial strategies to strengthen joints, muscle and improve movement patterns can be put in place, which helps to prevent injury and enable the athlete to do more event-specific work. 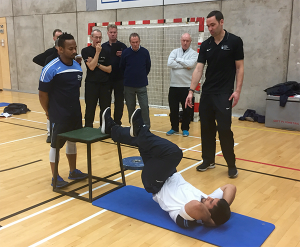 The screening and testing tools were general strength exercises along the specificity continuum. Richard introduced a set of low/high load exercises and capacity tests and explained to coached what to look out for. Coaches experimented with the exercises (single leg bridge, standing rotation, walking lunge, side hold, etc.), gave each other feedback and identified variants of the movements as remedial actions. The majority of exercises were related to hip strength, correct pelvis position and maintaining a static core. The scoring in those tests help during athlete profiling and develop improvement plans, which prevent injury and drive performance.

A very useful clinic and Richard busted some myth about strength & conditioning and highlighted some common exercises used by many endurance athletes, which are rather counterproductive to core strengthening.

Dr Kate Spilsbury, Physiologist with British Athletics, provided an overview of British Athletics’ Altitude Programme. Since the first altitude trips, the altitude programme has evolved and matured. What was initially perceived as a ‘holiday trip’ for athletes, has now turned into a thoroughly planned, high-tech expedition. Top endurance athletes, depending on their season goal, apply multiple altitude camps a year. Between November and January, athletes have been attending the High Altitude Training Camp (HATC) in Iten, Kenya for typically 3 to 4 weeks. The aim is to accelerate the development of aerobic fitness. In November to January, Iten in Kenya at 2,400m is ideal and has favourable weather and altitude conditions. However, for some athletes getting from the UK to Iten is a very long and tiring journey. Font Romeu, from the UK, is more accessible, though the weather is more unpredictable during the off season. Further into the season, British Athletics uses Font Romeu in the French Pyrenes or for US based athletes Flagstaff and Park City as altitude camps. Those locations enable athletes to stay at a lower level of altitude and do more intense sessions at a lower altitude while staying for the rest of the time at a higher base.

The research found that complementing altitude camps with altitude tents at sea level has an accumulative effect and helps the athletes to maintain and even increase high haemoglobin levels. 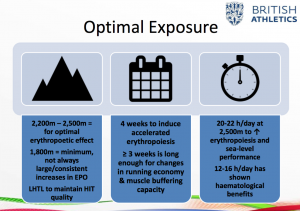 A couple of coaches were critical of the benefits of altitude training. The change in environment and the adaptations of the training programme was seen more as a risk than a benefit. It was pointed out that early adopters of altitude training in the 1970s and 1980s went to altitude and continued with the same amount and intensity they were used to at sea-level. When at altitude, depending on the level, intensity is reduced. High intense workouts are done sparsely, i.e. after 2 easy days, a more intense session follows to allow extra recovery. Further determinants of a successful altitude camp are better understood and controls are put in place to ensure that athletes arrive fit, healthy and conditioned at altitude to maximise the training effect.

To my surprise, British Athletics approach to altitude camps is quite controlled and regimented. The camps have clear objectives and measurements have to be in place to support those. Athletes are closely monitored on a daily basis and ensure that they follow their personalised training and not training too hard or join sessions of local athletes. The data gathering helps British Athletics to continuously improve and optimise the programme and get an in-depth understanding of the benefits and physiological changes in athletes of altitude training.

In contrast to the official British Athletics altitude programme, Mo Farah, Charlie Grice and Adam Clarke went to train in Ethiopia. However, all stayed in Kenya first before moving on to Ethiopia. It was highlighted that Mo Farah attended many altitude camps and spent a lot of time throughout the year at altitude, consequently his body is already adjusted. To gain extra benefit Mo Farah has to train at higher altitudes in Ethiopia and in addition use an altitude tent. The highlands of Ethiopia are flatter compared to Kenya.

Charlotte Purdue has been training at altitude in Falls Creek in Australia and is preparing for an altitude camp to Dulstrom in South Africa. Both locations are not part of the British Athletics altitude camp, though frequented by many international runners.

Another coach asked if athletes offered US scholarships should rather choose a university located at altitude. Kate confirmed that spending 3 years at altitude could be very beneficial for their performance and long term development.

The founder of Affinity Altitude Ray Matthews (Brighton Phoenix) presented his latest range of altitude tents. Ray, a club mate of the 1,500m runner Charlie Grice, assessed the altitude tents available on the market and thought he could improve and simplify the usability of those tents. Affinity Altitude offers two models, the ‘Oxy Hood’ and the ‘Oxy Wagon’. The Oxy Hood is a small version of the Oxy Wagon and fits around the upper body, while the Oxy Wagon covers the whole double bed. The altitude tents enable athletes to simulate altitudes of up to 3,500 meters.

Ray tried the altitude tent out for himself. After a couple of weeks, despite reducing his training load by 50% he kept on improving and maintains a mid 17 minutes 5k as a V50. He attributes the improvement to sleeping in the altitude tent. British Athletics has some units in circulations, British Cycling tested the tents with their cyclist too and received positive feedback, while the tent is also beneficial for triathletes.

The altitude tent comes with a generator (40 dBA) and starts from £1,900. These are possibly worth 2x altitude trips to Kenya. However, as pointed out by the British Athletics, the altitude camp and staying at the tent at sea levels makes the difference to maintain a high level of aerobic fitness for longer.

The responses among the coaches were mixed. While I am a strong advocate of altitude training camps, some of the middle distance coaches were sceptical about the value add such tents have. As we heard, leading athletes like Mo Farah and Matt Centrowitz use altitude tents all the time. One of the issues identified is that what is the effect when sleep gets interrupted, or one has to leave the tent. Further, a recommended minimum of 10 hours sleep is required, not an option for many athletes in full-time employment.

Elliot Giles, bronze medal winner in this year’s European Championships in the 800m talked about changing his coach and getting used to the new training regime. Matt Yates, a retired international middle distance runner, coaches Elliot. Elliot, still U23, is learning and getting familiar with the coaching process. Matt Yates quickly fills in the gap and entertains the room with his latest methods (Cognitive Behaviour Therapy) he has seen used by drug addicts for getting Elliot to reinforce his new regime. Next, Matt states that athletes should not limit themselves by thinking they cannot beat the Africans in important races. It seems to have worked well so far. Elliot made a significant improvement, earned a medal at the European Championships, made it to the Olympics and gained a lot of experience. An exciting athlete to watch.

Charlotte Purdue ran her debut marathon in the 2016 London Marathon (2:32:48) and narrowly missed out on making the team for the Rio Olympics. Charlotte changed coaches and is now coached by Australian coach Nic Bideau. Despite at young age, Charlotte always felt positive about the marathon and enjoys the training. Previous VO2Max tests suggested that she is particular suited for the more longer distances. Her long term aspirations is to make the Tokyo Olympics in 2020. Her next goal is to compete in the World Championships in London next year.

Charlotte talked about her build up for the Berlin Marathon. Unfortunately, the night before the race she felt sick and dropped out of the race the next day. A frustrating experience, though Charlotte quickly re-focussed and her coach entered her in the Frankfurt Marathon. She had a good race in Frankfurt and managed to run 2:30:04 and felt she has found her event. She wants to progress further in the marathon and want to follow the likes of Benita Johnson / Mara Yamauchi and progress towards 2:25 in the marathon.

Many coaches in the room assumed Charlotte or Elliot are on lottery funding.  Charlotte is a self-funded athlete, works part-time as a personal trainer/pilates teacher and funds her own altitude camps. Unlike other athletes on the funded programme, she does not receive the same amount of medical support from British Athletics. Coaches highlighted that there are many athletes trying to transition from national to international athletes or after coming back to the UK after their US scholarship in a similar situation. A kit or shoe sponsor supplies equipment rather than funds. This leaves athletes, not on funding trying to make their own arrangements. It is less the long term financial incentive that drives athletes rather than the prospect of performing at their full potential. Thanks to some sponsorship Elliot is a full-time athlete. He knows that he has to deliver results too to maintain his status.

Unfortunately, from a coaching perspective, there was little detail on the actual training programme. For example, peak mileage, typical build up, peaking, carbo-loading regime.

An insightful day at St. Mary’s which facilitates learning among coaches, sharing idea and contextualising strength & conditioning into their coaching reality. Not all of us have the means and opportunity to attend an altitude trip, though Font Romeu is only a flight away to Barcelona and a 2 hour drive. 1-2 weeks has benefits and accelerates aerobic fitness. For those keen to perform close to their full potential, altitude training is a must. 2015 I spend a week in Iten, Kenya and definitely benefited.