From time to time I follow Premier League football. I don’t have a particular team and neither am I informed on the ability of any particular team, though I follow with interest Jürgen Klopp and Liverpool FC. Jürgen Klopp has a diploma in Sports Science. His thesis was on race walking, so he must have an appreciation of endurance events.

Shortly after I have submitted the last blog entry on active recoveries, I went onto the BBC website and came across the very latest post on Jürgen Klopp (video). Klopp heard about the premier league fixtures during boxing day. Needless to say, he wasn’t pleased that he has to play Manchester City, a top team coached by the Spaniard Pep Guardiola followed 48 hours later to play an away game to FC Sunderland, coached by David Moyes. Klopp was slowly winding up his point, stating two matches in less than 48 hours are not the way to go about it. He admitted that he enjoys watching football during boxing days like many other football fans. However, he raised the point that all other teams around Europe take a break. Many players will have played more than 20 games by Christmas already. There is a risk of injury from playing too many games. More vital in Premier League football as a lot of money is at stake. Klopp suggests to take a break and claims this would help the England Team to perform better in big tournaments. What can we learn from Jürgen Klopp when we are training for a marathon and running too many tune-up races?

Last week the Virgin Money London Money Marathon announced the results of the ballot. Many including me have received their rejection magazine through the letter box. Running for a charity is the final option to get into the London Marathon. With London out of the way, most start to look at Manchester or Brighton, perhaps consider running a marathon in Europe – Paris, Rotterdam, Zurich, Vienna, Düsseldorf, Hamburg, Barcelona, etc. are worthy city marathon alternatives with a flat and fast course.

Many spring marathons take place between March and April. Once we made up our mind and paid the entry fee, we then have to worry about signing up for a Half-Marathon as a tune-up race. There is a common belief that when one trains for the marathon, then a Half-Marathon needs to be done before a marathon, even if the physiological demands for the Half-Marathon are slightly different compared to the marathon. Ironically, most of the elite runners, once their agents managed to secure them a place in a big city marathon will either not be allowed to race due to a risk of injury or none of the other event organisers want to hire a top runner when not committed and specifically training for their event. There must be some explanation for what makes runners run half-marathons before a marathon.

Between now and London Marathon, most try to get back into the groove and get their base fitness sorted. Working on strength & conditioning during the dark winter evenings helps too.

From January onwards, folks should start to look at their general preparation, building on the base fitness and expanding the long run. With 6-8 weeks to go, the marathon specific phase occupies most of March followed by a 2-3 weeks taper in April.

We now have a dilemma of finding a Half-Marathon race and fitting it in. When we choose a race, then likely a long run has to give way. We also want to do well and expect a PB, which hopefully sets us up nicely for the marathon.

What to do? There are many Half-Marathons on offer. It’s a busy market with Half-Marathons every weekend. On the other when running too many races during training, will it negatively affect my marathon training. These are general considerations among marathon runners.

Should I run a half-marathon?

Given the training circumstances, one can either run a Half-Marathon in the general preparation phase, specific phase or during the taper phase.

The aim of the taper phase is to get as fresh as possible and ready for the marathon it would not be advisable to run a Half-Marathon close to the marathon. While likely in good form, capitalising on the previous training cycles, an athlete need to factor in the recovery required when running the Half-Marathon. Also, there could be a risk of injury, endangering the marathon.

Having out ruled the taper phase, this leaves the general preparation or the specific marathon preparation phase. Towards the end of a general preparation would be an ideal time to test the waters with a Half-Marathon. The mileage is moderate, the intensity of the training is not too high. On the other hand, racing in March when runners need to practice their long runs should happen, running a Half-Marathon will be a bad idea. Most athletes reach their peak weekly mileage and train quite hard. The compound training effect suggests that we will be unlikely at our best form or fresh for a race. Further, whenever training volume and intensity increase/reduces and cross over, then there is a risk of injury.

When is the best time to run a Half-Marathon?

An ideal window of opportunity for racing a Half-Marathon is between February and early March. Wokingham or Brighton are well positioned for those wanting to build up to the London Marathon.

In a 16 weeks marathon build up, the general preparation phase starts mid-December and lasts until mid-January. Competitive phase and taper starts in late March.

Similar to Brighton, though Manchester is a week earlier.

In a 16 weeks marathon build up, the general preparation phase should start early January and should last until mid-February. Competitive phase and taper starts in April.

Volume and Intensity during the Marathon specific phase

During the marathon specific phase, as the name suggests, the focus needs to be specific to the event demands of the marathon. 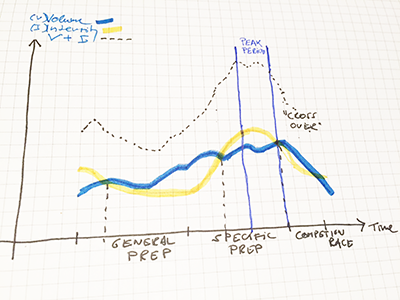 Sure, some runners prefer to get constant feedback from a race result, though the risk is high, when it matters on marathon day to underperform and treat the season’s goal as just another race. Physiologically, we will be missing out on the most important training unit for the marathon, the long run.

While there are ‘cut-back’ weeks in a marathon specific phase, i.e. very third of fourth week there is a week of reduced volume and intensity to allow the body to repair itself from the previous week’s training, some runners use this opportunity to run a ½ marathon. However, instead of focusing on recovery, some will up the intensity once more and will accept a few more days of post-race recovery. Choose wisely when it comes to including a tune-up race during the marathon specific phase.

Are there any other options?

If you need to take part in a race during your marathon campaign, then the following options come to mind.

Option 1 – Run a Half-Marathon at your target marathon pace.

Resist racing a Half-Marathon at your Half-Marathon pace and rather shift a gear down. After a 1 or 2 miles of an easy warm-up run 8-9 miles at your target marathon pace and follow on with a cool-down of another 1-2 miles. Operating at a lower intensity will ensure your training remains marathon specific and you rehearse your marathon target pace. This approach requires a lot of discipline, especially during the first few miles when everyone around you is running hard.

Option 2 – Run a 20 Mile race as a training run at your long slow distance pace.

In the build-up to the London Marathon, there are a few 20 Mile races. 20 Mile races are a bit old school. For example, there is the Finchley 20. A 20 Mile race is an excellent opportunity to master long runs, while not having to worry about drinks and nutrition. However, resist the urge of running a 20 Miler as an all-out effort. You will only end up depleting your glycogen muscle stores. Rather than a few miles at your target marathon race or 5% slower than your marathon target pace and practice pacing, fuelling and drinking.

Option 3 – Running a shorter race as part of a long distance run.

For example, run 10k at an easy pace, run a 10k at marathon pace followed by another 10k run. Logistically, challenging to make it to the start line on time.

While there are options, too many tune-up races during marathon training can be counterproductive. Due to the accumulated fatigue of increased training week in week out we will not be physically in the best position to run a Half-Marathon personal best.

When it comes to training and racing, everyone is different and an experiment of one. What works for one doesn’t work for others. Some are happy to work with patience toward a big goal, while others need stepping stones along the way to fuel their motivation.

Considering a lot of commitment is required when training for a marathon, my advice is to avoid running a Half-Marathon during the marathon specific phase. It’s best to use a Half-Marathon as a marker at the end of the general preparation phase to assess the level of fitness. Once we know where we are fitness-wise, we will address weaknesses and will train more focused through the marathon specific phase.

As we have seen, during the marathon specific phase we will hit the peak weekly mileage, we will be running our longest runs. The combined volume and intensity will reach its peak. Runners need to be mindful during the marathon phase not to overload their body and increase the risk of injury. Contrary, ensuring enough recovery after the long runs will become vital. Sticking to structured training plan helps to navigate around those weeks of specific training and keep the risk of injuries at bay.

Psychologically, during the taper phase, the focus needs to be on the marathon. When we get distracted by running a 10k, we are less focused and will not take the final days before the race too seriously. When running a marathon, respect the distance and the training you need to be doing.

As I finished this blog, looking at the premier league table. Klopp must have done something right with his planning as his Liverpool FC shares the top spot.

Urban Bettag coaches for the Mornington Chasers and leads the development of their track training and mentors their junior coaches. He blogs and shares his wisdom about running on the Hare Brain Blog every Friday (sometimes Saturday).