An unknown Member added an event to the calendar. 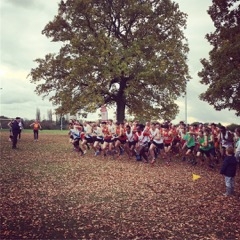 THE FRATERNITY AND SORORITY CUPS

The Fraternity & Sorority Cups will be run as a combined race on 25th November at 2:30pm. The five mile mud-fest will be held as usual in Trent Park.

This is a very special year for us as it is the 50th Anniversary of the formation of Barnet & District AC, following the merger between Hampstead Harriers and Barnet AC on 1st January 1967. Come along and help us to celebrate this milestone for our club!

The Fraternity Cup was first presented by the President of Hampstead Harriers in 1931 and for almost a century has been contested by North London clubs in a spirit of brotherhood.  Many of the clubs on the trophy have merged or fallen by the wayside, but the annual race remains an important date in the cross country calendar. The Sorority Cup competition for women was added more recently, and is one of the few cross country races where women & men combine to run together over the same distance.

As ever, Barnet & District AC are excited to be hosting this event, it promises to be a fun & friendly event for all abilities run over a hilly course that will prove a great test for both the seasoned athlete and beginners alike.

With the two classic Trophies being competed for and presented on the day, and the event being held in conjunction with the Young Athletes NWLL races, we look forward to welcoming you all to a fantastic day of cross country running.

Public Transport - cockfoster Tube is on the Picadilly Line 5 minutes walk from the start.