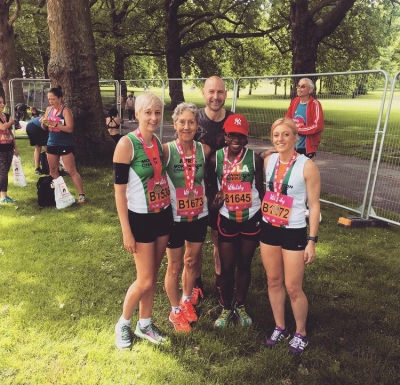 Chasers at the Westminster Mile yesterday.

Within our club membership, the triathletes have quietly been working and training hard to achieve amazing performances and enjoyable experiences (judging by the smiles at the finish line). From the London League Mob match, currently 13th out of the 26 scoring teams, to National Championships and qualifying, the results have been outstanding in both medals and personal best performances.

Nicola Timmins continues in her successful triathlon journey with a silver medal in her age-group in the British Triathlon Sprint Championships in Strathclyde this weekend (Nikki's inspirational triathlon story is below). Meanwhile in Spain, Gareth Jones achieved a personal best in the 70.3 in temperatures over 30 degrees.

The previous weekend, Nikki automatically qualified for the GB team in her age-group at the ITU Sprint race at Eton Dorney. Sarah Taylor, who also continues to improve with every race and effectively uses her running pace, Jonathan Thomson and Andrea Sanders-Reece are within the qualifying times but have to wait until the three races have been completed to find out if they are in the GB-AG team this year.

In the London League, Hannah McQuarrie, Mel Lomax, Leyla and Andrea competed in the Crystal Palace Triathlon picking up valuable Mob Match points and silverware (and tyres) for Andrea in her age-group. The cheering squad headed by Lizzy pushed and pulled everyone on.

Results from multi-sport events are not shown automatically on the club results page so if you take part in a duathlon, aquathlon or triathlon, please enter them onto your own profile.

Developing from a strong, competitive running background, I've long believed, is key to success in duathlon and triathlon. I am sure there are cyclists and swimmers who would argue otherwise but the fitness from running coupled with the run being the last and most competitive discipline pays dividends in the race for the line.  -Andrea

"You are so right about being a good runner being the key - I was looking at yesterday's results, I finished the bike 50/153, had a good transition and the fastest run split and finished 19/153 overall among the women!” 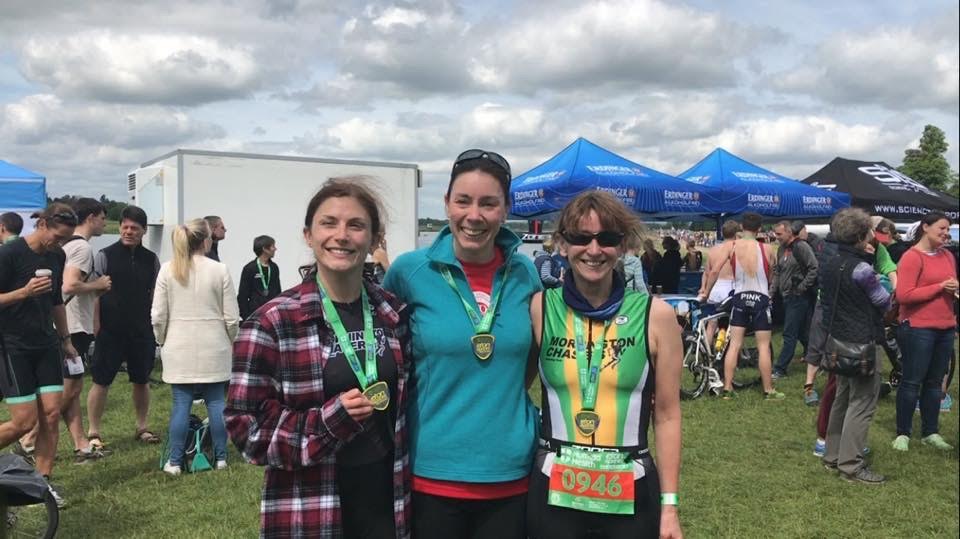 I always thought it'd be fun to do a triathlon, but with no road bike, no wet suit, having stopped swimming lessons when I got my 25m badge, limited time and no space for more sports kit I didn't actually think I'd ever get round to doing one. Turns out none of that mattered. A low key duathlon at the Velo Park with a bunch of Chasers last autumn was a great introduction - I hired bike, helmet and shoes for £12, then the more experienced Chasers showed me the ropes before the race (I think it was Chi!). It was a really friendly event, suitable for all levels and all types of bike (there was at least one shopper!) and a great way to try out multi sports without any investment in time or money. I recommend it to anyone who just wants to experience running off the bike - it's a funny feeling at first, but I think most runners actually run really well after the bike even if it feels a bit like running in treacle. You also get the satisfaction of passing all the good cyclists on the final run!

Six months on I wouldn't call myself an accomplished swimmer or cyclist, but it's been fun acquiring new skills and the fitness I've gained from swimming has (I think) contributed to my improved running over the last few months. The results I've had have come as somewhat of a surprise - they are solely down to a strong run and (it turns out) being quick at taking my shoes on and off!

I definitely recommend giving duathlon/triathlon a go, it's a lot of fun and a really friendly community. And for the competitive runners in the club the chance to wear a GB tri suit and run down the blue carpet is definitely achievable! Check out the age group section on the British Triathlon website..." –Nicola T

A further update from Nikki…

Last week I was on my way to the Highlands on holiday and decided to stop and do a triathlon on the way (got to make the most of my recently acquired bike and wetsuit!). Hadn't realised until a couple of days ago it was the British Sprint Distance Championship. I came second in my age group and qualified for the GB age group team for next year’s European Champs! Quite a surprise, as you can see from the photo. 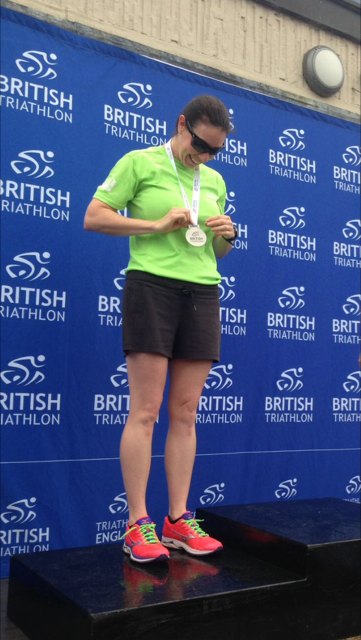 The Avenue of the Giants- California

After having surgery for a torn left leg ligament in December (on my birthday!!), not being able to run for four months plus being not being race fit, I did managed to complete the 10km run recently at The Avenue of the Giants event, THE best event that I have ever run in, just giant Sequoia trees - not a building to be seen for miles. 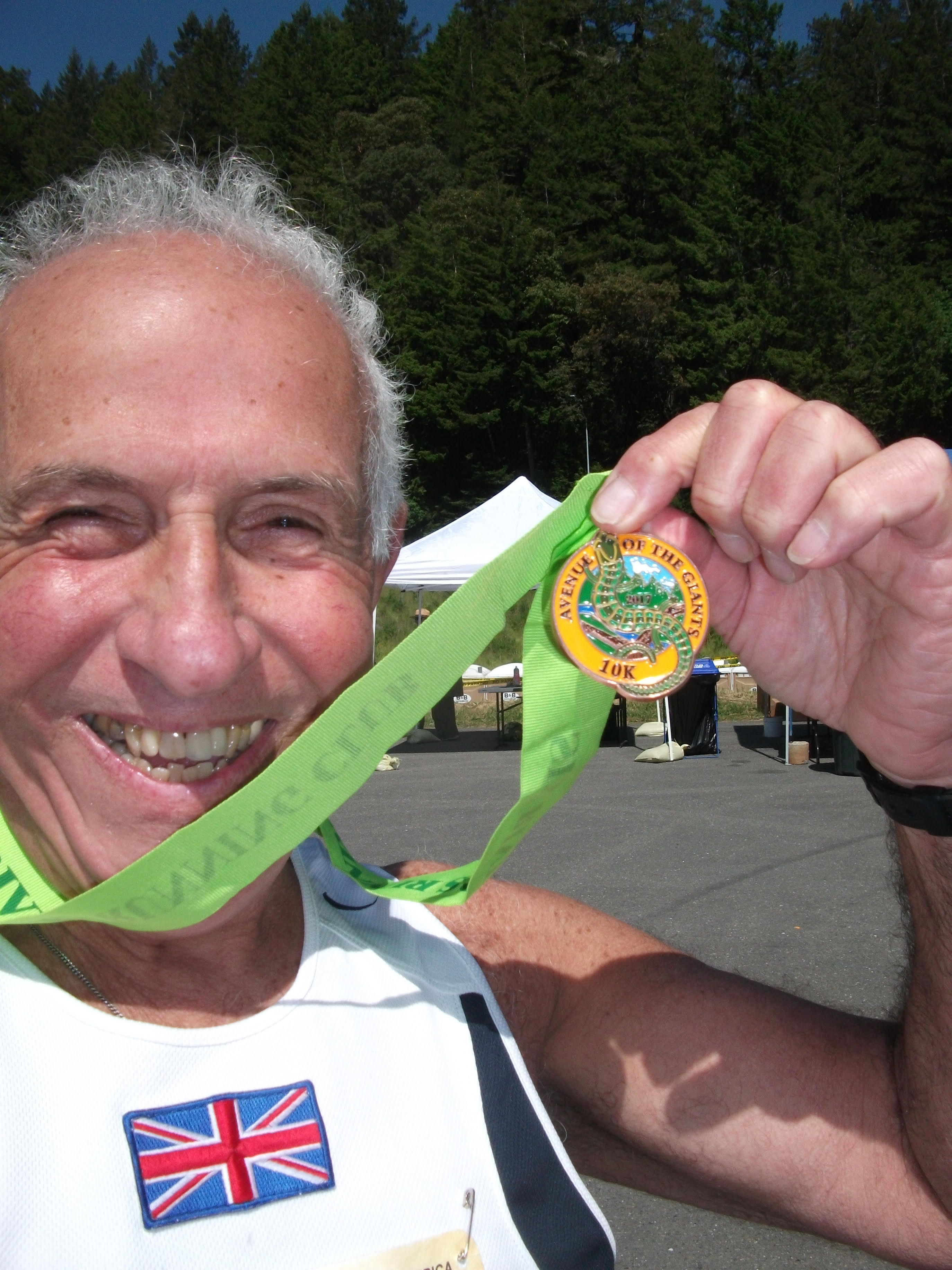 Various Chasers made their way to The Mall yesterday morning to smash out a mile (a race distance not to be underestimated). Numerous PBs were set (see results below) including one Stephen Nash who broke the club’s V40 road mile race record.

I’m not sure if you’ve heard but a bus has been organised to take everyone to the first Summer League race of the year in Gunnersbury next Sunday. The bus will leave Talacre at 8am and return once all of the races are over. You can bring your children who will have the chance to annihilate the offspring of the competition in the 1 mile (over 7s) or 400m (under 7s). Sign up here.

We will need marshalls to help out at the Summer League Regents Park 10k. Sign up here.